Nowadays, the SONET/SDH network is an universal network that combines with WDM (wavelength division multiplexing) technique to transmit multiple optical signals over a single fiber. In future networking, high speed transmission is no doubt the migration trend. Inspired by the SONET/SDH network, ITU-T (ITU Telecommunication Standardization Sector) has defined the optical transport network (OTN) to achieve a more cost-effective high speed network with the help of WDM technology.

Generally speaking, OTN is a network interface protocol put forward in ITU G.709. OTN adds OAM (operations, administration and maintenance) functionality to optical carriers. It allows network operators to converge networks through seamless transport of the numerous types of legacy protocols, while providing the flexibility required to support future client protocols. Unlike the previous SONET/SDH, OTN is a fully transparent network that provides support for optical networking on a WDM basis. Since multiple data frames have been wrapped together into a single entity in OTN, it is also known as the “digital wrapper”.

OPU, ODU and OTU are the three overhead areas of OTN frame. OPU is similar to the “path” layer of SONET/SDH, which provides information on the type of signal mapped into the payload and the mapping structure. ODU resembles the “line overhead” layer of SONET/SDH, which adds the optical path-level monitoring, alarm indication signals, automatic protection switching bytes and embedded data communications channels. OTU is like the “section overhead” in SONET/SDH, and it represents a physical optical port that adds performance monitoring and FEC (forward error correction). OCh is for the conversion of electrical signal to optical signal and modulates the DWDM wavelength carrier. OMS multiplexes several wavelengths in the section between OADMs (optical add drop multiplexer). OTS manages the fixed DWDM wavelengths between each of the in-line optical amplifier units.

There are many advantages of OTN. Firstly, it separates the network against uncertain service by providing transparent native transport of signals encapsulating all client-management information. Secondly, it performs multiplexing for optimum capacity utilization which enhances network efficiency. Thirdly, it improves maintenance capability for signals transmitting through multi-operator networks by providing multi-layer performance monitoring.

With the fast evolution of networking, OTN standard is able to reach a higher speed service. Its multiplexing hierarchy allows any OTN switch and any WDM platform to electronically groom and switch lower-rate services within 10 Gbps, 40 Gbps, or even 100 Gbps wavelengths. This eliminates the need for external wavelength demultiplexing and manual interconnects. OTN network is definitely the best solution for future high speed networking over long distance. The picture below shows the OTN mapping diagram for high speed transmission.

Over the years, OTN has never stopped improving itself. Driven by the needs for high speed transmission, OTN combined with WDM is obviously a better choice in networking. It is a cost-effective way to build an optical transport network accommodating high throughput broadband services. I believe more and more people will employ this standard in their own network in the near future.

With the development of optical communication technologies, people are entering into the new era of information. In order to overcome the data rate limitation of traditional communication system, WDM and OTDM technologies are typically used to increase fiber optic bandwidth. However, no matter which kind of technology is adopted to construct fiber optic network, optical add-drop multiplexer (OADM) technology is needed in the system. It makes the fiber optic network more flexible, optional and transparent. OADM is now a key component of the all-optical network to enhance the network reliability and efficiency. This article will give a brief introduction about the basic knowledge of OADM.

So what is an optical add-drop multiplexer or OADM? To be specific, an OADM is a device used in wavelength-division multiplexing systems for multiplexing and routing different channels of light into or out of a single-mode fiber. “Add” refers to the capability of the device to add one or more new wavelength channels to an existing multi-wavelength WDM signal. On the contrary, “drop” refers to its ability of removing one or more channels and passing those signals to another network path.

The WDM signal contains multiple wavelength channels. When these wavelengths enter into the main input of OADM, they can be selected to enter the drop output ports according to your application requirements. Correspondingly, the add ports will input the required wavelength channels. And those irrelevant wavelengths will directly pass through OADM and then be multiplexed with the added wavelengths together leaving the main output. Therefore, the function of OADM is to download necessary local signals and upload signals for the user of next node. 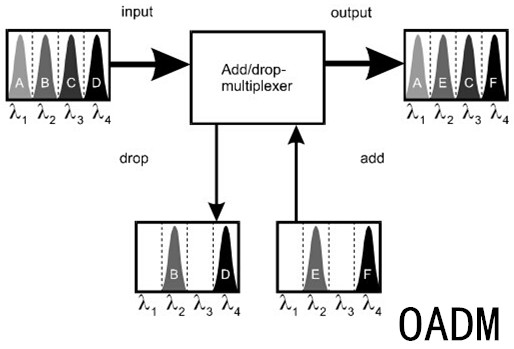 Fixed OADM and reconfigurable OADM are two commonly used types of OADM. The former is used to drop or add data signals on dedicated WDM channels, and the latter is used to electronically alter the selected channel routing through the optical network.

Fixed OADM or FOADM is the traditional construction of OADM. It uses a filter to select a dropping wavelength and a multiplexer to add a new channel at the same wavelength. Different from FOADM, reconfigurable OADM or ROADM is a dynamic type which has the ability to remotely switch traffic from a WDM system at the wavelength layer. It provides flexibility in rerouting optical streams, avoids faculty connections, and allows minimal service disruption and the ability to adapt or upgrade the optical network to different WDM technologies.

OADM is an important element of an optical fiber network. It can be both deployed for long-haul core networks or short metro networks. Fixed OADM and reconfiguration OADM are two commonly used types. A further development of OADM is absolutely the future trend in fiber optic communications.

For a better signal transmission in fiber-optic communication, different kinds of technologies are applied to the industry. Wavelength-division multiplexing (WDM) is one of the commonly used technologies which multiplexes a number of optical carrier signals onto a single optic fiber by using different wavelengths of laser light. That is to say, WDM enables two or more than two wavelength signals to transmit through different optical channels in the same optical fiber at the same time.

In the WDM system, there are two types of divisions – CWDM (coarse wavelength division multiplexing) and DWDM (dense wavelength division multiplexing). They are both using multiple wavelengths of laser light for signal transmission on a single fiber. However, from the aspects of channel spacing, transmission reach, modulation laser and cost, CWDM and DWDM still have a lot of differences. This article will focus on these distinctions and hope you can have a general understanding about CWDM and DWDM technology.

Since the wavelengths are highly integrated in the fiber during light transmission, DWDM is able to reach a longer distance than CWDM. The amplified wavelengths provide DWDM with the ability of suffering less interference over long-haul cables. Unlike DWDM system, CWDM is unable to travel unlimited distance. The maximum reach of CWDM is about 160 kilometers but an amplified DWDM system can go much further as the signal strength is boosted periodically throughout the run.

CWDM system uses the uncooled laser while DWDM system uses the cooling laser. Laser cooling refers to a number of techniques in which atomic and molecular samples are cooled down to near absolute zero through the interaction with one or more laser fields. Cooling laser adopts temperature tuning which ensures better performance, higher safety and longer life span of DWDM system. But it also consumes more power than the electronic tuning uncooled laser used by CWDM system.

Because the range of temperature distribution is nonuniform in a very wide wavelength, so the temperature tuning is very difficult to realize, thus using the cooling laser technique increases the cost of DWDM system. Typically, DWDM equipment is four or five times more expensive than CWDM equipment.

CWDM and DWDM are both coming from the WDM technology that is capable of conveying multiple wavelengths in a single fiber. But with different characteristics, people should think twice before choosing the CWDM or DWDM system. CWDM usually costs less but its performance is far behind DWDM. Both your requirements and budget need to be taken into consideration. Moreover, the WDM products including CWDM mux/demux module, DWDM mux/demux module and optical splitter are highly welcome in the market.