For many household use, it is common to see just a modem and a router. That’s enough for most family network requirements. However, if you have too many computers to manage, an Ethernet switch is definitely what you need. Since network switch is not prevalent in ordinary homes, many people don’t have a clear understanding of it, let alone its usage. Here we will figure out what is an Ethernet switch used for and how to use and Ethernet switch.

What Is an Ethernet Switch?

An Ethernet switch is a network device used to connect different PCs, servers, laptops or other Ethernet devices to a local area network. In this way, the connected devices can communicate with each other. The switch utilizes an MAC access table to exchange data packets among these devices.
Network switches come in many types. Different switches have different applications and functions. They may come in 16, 32 or 64 ports, and also in various port speeds. The basic speed is 10 megabit per second, then 100 megabit. And today we also have faster gigabit Ethernet switch which realizes 1000 megabits per second. Switches that contain more ports or higher speeds are suitable for more demanding conditions.

What Is an Ethernet Switch Used for?

The Ethernet switch plays an integral role in most modern Ethernet local area networks (LANs). Here introduces two switch types for different utilities. The one is the fool-proof unmanaged Ethernet switch and the other is the intelligent managed switch.

Managed switch is more advanced than unmanaged switch as it not only possesses what the latter features with, but also can be configured and properly managed to offer a more tailored experience. Most managed switches are 10gbe Ethernet switch, 40gbe, 100gbe or much faster switches. Those can be deployed in large data center, server rooms and so on.

How to Use an Ethernet Switch?

Whether it is the unmanaged switch or managed switch, the usage remains essentially the same. It should initially access the network and the power supply. This part introduces using an Ethernet switch.

First, connect modem to Ethernet input line. Modem is the device that brings the signal into the network.

Second, connect router to modem. Router translates the private network address into public address so as to entitle all the connected network devices to the Internet.

Third, connect an Ethernet cable to one port on the switch, then connect the other end to a wired device such as a computer. Repeat this step to connect all PCs, servers, laptops or other Ethernet devices.

Fourth, connect an Ethernet cable to one of the ports at the back of the switch, then connect the other end of the cable to one of the Ethernet ports at the back of the router. The switch is thus becoming the extension of the router. You plug in one output to your router, and the other ones will just split up that connection to give you more hookups.

Fifth, connect the supplied power adapter to the power port on the switch, then connect the other end into a power socket. This step can be omitted if it is a PoE switch. 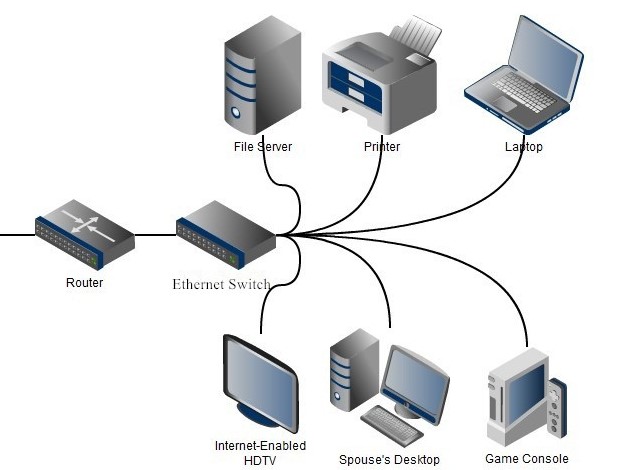 Having finished the connection, the unmanaged switch is ready to go while the managed switch may require further adjustments through a supported method, whether it is a command line interface (accessed via secure shell, etc.), a web interface loaded in your web browser or Simple Network Management Protocol (SNMP) for remote access. This approach will unleash various options, including port speed, virtual LANs, redundancy, port mirroring, and Quality of Service (QoS) for traffic prioritization.