Core switch is not a certain kind of network switch. It refers to the data switch that is positioned at the backbone or physical core of a network. Therefore, it must be a high-capacity switch so as to serve as the gateway to a wide area network (WAN) or the Internet. In a word, it provides the final aggregation point for the network and allows various aggregation modules to work together.

What Is Distribution Switch？

Access switch generally locates at the access layer for connecting the majority of devices to the network, therefore it usually has high-density ports. It is the most commonly-used gigabit Ethernet switch which communicates directly with the public Internet, mostly used in offices, small server rooms, and media production centers. Both managed and unmanaged switches can be deployed as access layer switch. 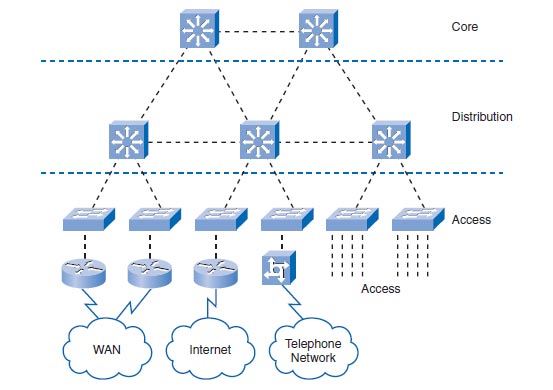 The switches may co-exist in the same network, and coordinate with each other to contribute to an unrestricted network speed with each layer switch performing its own duty. Well, what’s the difference: core switch vs distribution switch vs access switch?

The lower levels the switch dwells in, the more devices it connects to. Therefore, a big gap of ports number exists in access switch and core switch. Most access switches need to connect various end user equipment ranging from IP phone, to PCs, cameras etc,. While the core switch may be just linked with several distribution switches. Meanwhile, the higher layer the switch lies in, the faster port speed it requires. Access switch is to core switch what river is to the ocean, as the latter one has the large throughput to receive the data packets from the former one. Most modern access switches come with a 10/100/1000Mbps copper ports. An example of this is FS S3910-24TS 24 port 100/1000BASE-T copper gigabit Ethernet switch. While core switches commonly have 10Gbps and 100Gbps fiber optic ports.