With the rapid development of networking, a variety of technologies have been created. In 2003, PoE (power over Ethernet) network technology has been standardized. And it is now widely used for wireless LANs (local area networks), IP cameras and VoIP (voice over Internet protocol) phones. PoE allows cables to carry both electrical power and data signal to devices. Electrical current will support the operation of devices which greatly reduces the amount of wires used for network installation. Thus, the emergence of PoE network is absolutely a good news for the development of cost-efficient networking. Next, more information about PoE network will be discussed in the following paragraphs. 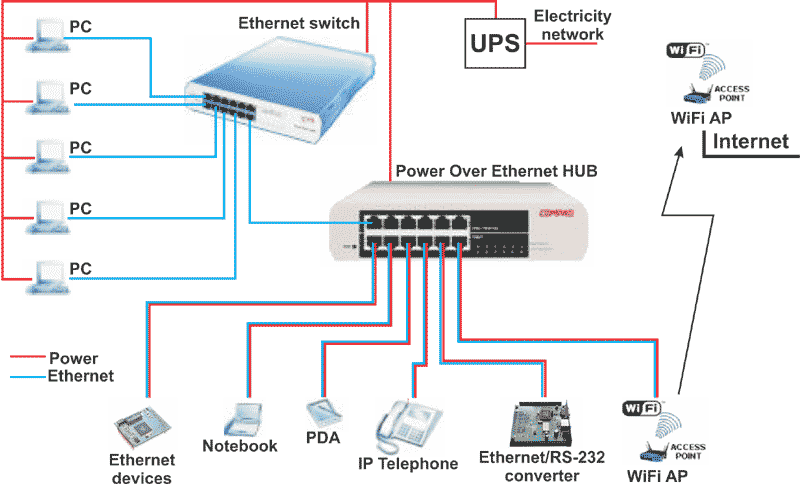 There are three basic components in PoE system – PSE, PD and Ethernet cable. PSE (power sourcing equipment) like PoE switch is the device used for delivering power to cable. PD (powered device) is the device used for receiving power from the cable. And cable will help transmit the electrical power and data signal. The electrical current will first go into the cable at the PSE end, and then come out at the PD end. Since it is the transmission of electric signal, PoE is only available to twisted pair Ethernet cabling. Also, the current is separated from data signal so that neither of them interferes with the other.

Using the PoE network has many advantages:

VoIP phones, WLAN, RFID (radio frequency identification), security cameras or access control devices are major applications for PoE network. Using PoE network enables the VoIP to receive uninterrupted power through the network, without the need for an AC outlet for each phone. And WLAN access point can be placed in different locations such as ceilings, hallways, lobbies without electrical outlets. Likewise, PoE allows RFID readers to be strategically situated in locations that optimize effectiveness. And it is cheaper to use PoE network for security cameras or access control devices on ceilings, hallways, lobbies, or outdoor areas.

To sum up, the advent of PoE has greatly improved the effectiveness of network. Equipment are able to be located at any place due to the power availability. And a large number of cost will be saved by eliminating unnecessary wires. This article only gives a brief introduction to the PoE network. There still has a lot for us to explore.