To meet system bandwidth needs and provide higher density cable connectivity, building backbones and data center backbones are migrating to 40G and 100G Ethernet network. Making the migration path smooth has become a hotspot. Network designers are turning to MTP components which can provide cost-effective solutions for cabling systems of data centers. We know that MTP components are designed with complex structures, so before you start your 40G Ethernet network deployment, there are a few aspects of MTP cabling that require some thoughts.

First and foremost is the polarity. With the LC connector typically used for 1G and 10G fiber cables, this isn’t a big deal. You can flip the two fiber strands on the LC connector easily to invert the polarity if needed. However, the MTP connector is fixed, you can’t change the ordering of the strands in the connector. Take 12-fiber MTP trunk cable for example, it is made up of 12x individual strands of fiber and one 12-fiber MTP connector on each end. Typically in 40G Ethernet network deployment, the 12-fiber MTP cable transmits optic signals on first 4x strands, and receives optic signals on the last 4x strands. The 4x “transmit” strands in MTP connector on one end need to end up at the “receive” strands in MTP connector on the other end. In other words, 8 of the 12 fibers are used to provide 40G parallel transmission and the polarity of the cable has to be inverted between the two devices. In addition, there are three polarity methods for MTP cabling. Each of them has different features. It is recommended that a method be selected in advance according to the specific requirements of the cabling situation and maintained consistently throughout an installation.

MTP adapter, or MTP coupler, is simple plastic rectangle that holds two MTP connectors together. The other important factor to note about MTP adapter is that they can be either key-up to key-up, or key-up to key-down, and this corresponds to the key position of MTP connector. When the key sits on top, this is referred to as the key up position. On the contrary, when the key sits on bottom, we call it key down position. On a key-up to key-up adapter, the keys are pointed the same direction on both of the connectors. While on a key-up to key-down adapter, the keys are on opposite sides. This can effect the polarity of the fiber link. To have a better understanding of this, here is a figure for you. 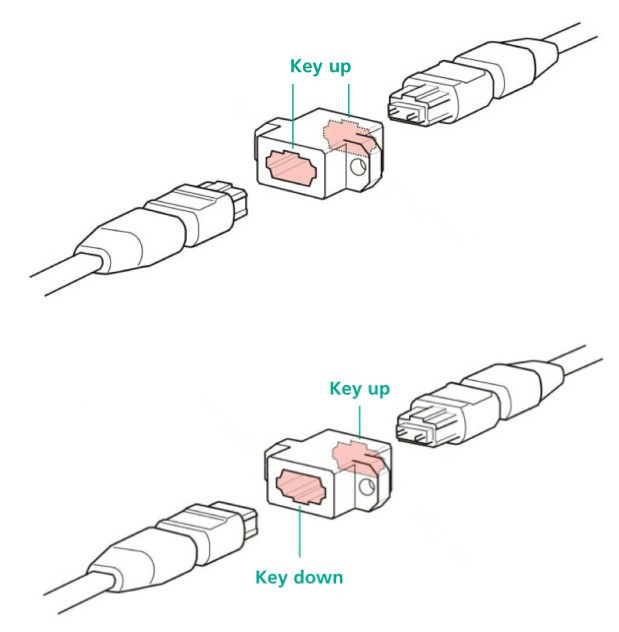 Being able to provide an easy migration path for higher data rates that will require parallel optics such as 40/100G Ethernet network, MTP cabling is commonly used by network designers to satisfy the increasing demands for higher transmission speed and cabling density. However, before the installation, three major problems—polarity, gender of MTP connector and key position of MTP adapter have to be solved to ensure the smooth data transmission over the optical links.