What Is Network Switch and Router?

To get clear about how to connect wireless router to switch, this part will state the function of network switch and router first. What is a switch in networking? A network switch is used to connect multiple devices such as computers, printers, IP camera and modem on the same network within a building. In this way, these devices can share information and communicate with each other.

What is a router in networking? A router is sometimes connected to a modem at one side and many other devices on the other side. Because the modem will only talk to the first computer that talks to it, the router at the position serves like a dispatcher to share the connection among all your devices. This enables all connected computers to share one single Internet connection.

How to Setup a Network Switch and Router?

From the above introduction, we know that both the network switch and the router can be connected directly to a modem. However, when the two devices coexist, how to deploy them. Shall I connect modem to router to switch or modem to switch to router?

Modem to Router to Switch: Network Switch After Router

In most cases, you will see people put the modem first, followed by a router and then a gigabit Ethernet switch. The principle is that the modem gives the public IP address to the router, and the router assigns the private addresses to the devices connected to it, while the network switch doesn’t handle allocating IP addresses but serves as the extension of the limited ports on the router, to receive more devices. In this scenario, all your devices with private addresses are safe as they are not directly visible to the internet. 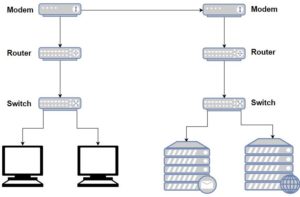 Modem to Switch to Router: Network Switch Before Router

Some people propose going from a cable modem to switch to wireless router. This seems good because all your devices on the network switch will have direct connections to your ISP. However, the truth is, your ISP does not offer multiple public IP addresses before the full transition from IPv4 to IPv6. So one or all ISP connections will likely fail and all of the devices connected to the switch would be exposed to the internet.

In a word, placing a modem to switch to router is not possible. At least not practically. Each port on the switch is a different IP address. So it doesn’t exist? Probably not unless your modem integrates the function of a router so that you can rewire and reconfigure the wireless router to set it up as access point. Seen from the outside, you indeed put a managed switch before router, however it still follows the principle that router goes before network switch.

Network switch before router or after router? Have you made it clear? This post has stated modem to router to switch vs modem to switch to router. Hope when you set up your network with router and switch, you can put them in the correct order according to your needs and the products themselves (the modem type). Here at FS.COM you can find various network switches including 10 gigabit switch, 40 gigabit switch and 100 gigabit switch, etc.