In the big data era, gigabit Ethernet switch with high capacity has gradually penetrated from big enterprises, SMB to small offices and homes. Newly emerged technology like WIFI is also driving the proliferation of wireless APs and other applications. Therefore the Ethernet topology requires for a comprehensive integration of various devices like firewall, servers, routers and multiple Ethernet switches. How to connect multiple managed switches together? Can I simply connect network switch one by one? Does daisy-chaining switch make sense? Or should I stack switch with stackable switch to set up a switch stack? What’s the best method to connect several data switches together?

Switch cascade is a traditional way to connect multiple Ethernet switches, which comes with various methods and network topology under different requirements. Among them daisy chain topology and star topology are two common ways.

Daisy chain is a layout form to connect multiple Ethernet switches together in sequence or in a ring. A simple linear topology displays as A-B-C, in which you just daisy chain each network switch top to bottom. For no more than 3 Ethernet switches, a linear topology of daisy chaining is okay since there is no loop. However, it owns drawbacks in switch failure due to lacking redundancy. Once one network switch fails, the others will also be dragged in. A simple ring topology is A-B-C-A, which can provide redundancy in link failure. However, simultaneously a loop creates when you finally daisy chain switch C back to A. Thus even only daisy chaining 3 Ethernet switches, an inevitable loop can be a fatal weakness. 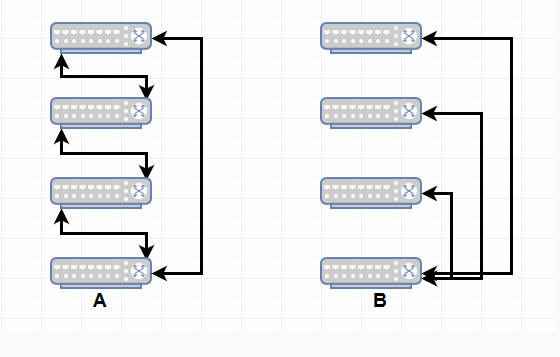 Compared to daisy chain topology, a physical star topology by deploying a powerful core switch to connect multiple access switches with uplinks is an optimal solution. For instance, connecting each gigabit switch via 10G SFP+ uplink to a central 10GbE switch. Or connecting a powerful gigabit Ethernet switch to each edge switches. In this scenario no loop occurs and all access switch is much closer to the central switch data center. For redundancy concern, you can also double or triple uplink each access switch to the core switch. 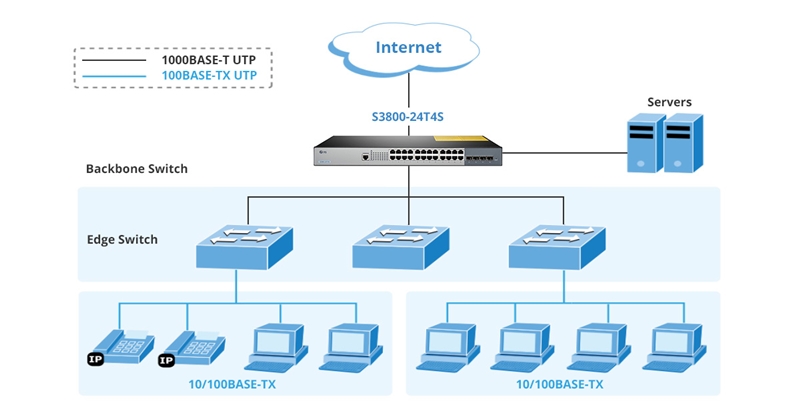 To stack switch with managed stackable Ethernet switch can set up a switch stack, which works as a unified system with one console port for control to enhance network scalability and simplify network management. The port density and performance of switch stack can equal to expensive rack mount switch. Say stackable 24 port gigabit managed switch with 4 10Gb SFP+ uplinks: S3800-24T4S 1000Base-T copper switch and S3800-24F4S SFP switch. Both Ethernet switch supports up to 4 24 port switches stacked together, providing 96 1GbE port density and switching a total capacity of up to 512 Gbps. Also with single and dual power supply available, this 24 port gigabit managed switch offers redundancy in emergent power outage. To stack up S3800-24T4S 24 port switches with 10G SFP+ ports, you should connect them via SFP+ modules with fiber patch cable or via DAC or AOC directly. 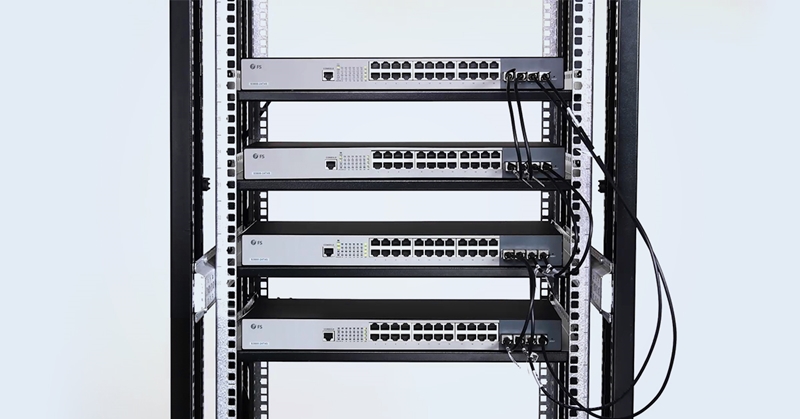 What Is the Best Way to Connect Multiple Ethernet Switch?

Using stackable switch to stack switch leaves out loop and other link issues. However, it only be feasible among same stackable switch model or stackable switch from the same vendor. Also, all Ethernet switches shall be stacked together, so it doesn’t support separate placement.

Table below compares the pros and cons for connecting multiple network switches by daisy chaining switch and stacking switch. You can refer to your own demand for selecting the best way.