As a new emerging technology, 100G is some sort of evolution and part of revolution. The new CFP (C form-factor pluggable) optics is now a revolutionary step as one form factor of 100G optic transceiver. The CFP modules offer the enabling step for cost-effective and successful 100G deployment. So what is it? And how does it work in 100G network? This article would give a comprehensive introduction to CFP module. 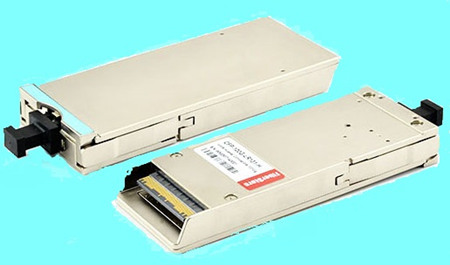 Abbreviated as CFP module, C Form-Factor Pluggable transceiver is a multi-sourced pluggable transceiver used in the transmission of high-speed digital signals. It is specified by a multi-source agreement (MSA) between competing manufacturers. The c stands for the Latin letter C used to express the number 100 (centum), since the standard was primarily developed for 100 Gigabit Ethernet systems. It is a hot-swappable input/output transceiver that is used in the data communication and telecommunication networks.

The CFP module was designed after the small form-factor pluggable transceiver (SFP) interface, but is significantly larger to support 100 Gbit/s. While the electrical connection of a CFP module uses 10 x 10 Gbit/s lanes in each direction (RX, TX) the optical connection can support both 10 x 10 Gbit/s and 4 x 25 Gbit/s variants of 100 Gbit/s interconnects (typically referred to as 100GBASE-SR10 in 100 meter MMF, 100G CFP LR10 and 100G CFP LR4 in 10 km SMF reach, and 100GBASE-ER10 and 100GBASE-ER4 in 40 km SMF reach respectively.)

– Single 3.3V Supply for Power and a Power dissipation < 12W

One distinctive feature of CFP modules is that they support digital diagnostic monitoring functions or the digital optical monitoring. This is the feature that gives users the ability to monitor the real-time parameters such as the optical output power, the optical input power, the temperature, the laser bias current and the transceiver supply voltage.

The basic CFP modules consist of the following parts.

Most of the CFP module adhere OIF CFP-ACO (Analog Coherent Signals) and are connectable to multiple DSP’s. The biggest engineering challenge that CFP2 faces is the adoption of the high-speed 25 Gbps electrical interface due to the reason that the CFP was based on the third generation.

It can be a multimode parallel optic transceiver module that is designed to offer high-density 100G Ethernet and Optical Transport Network (OTN). The device is designed to offer maximization of the delivery of the 10G data channels for the 100G networks that support 100 Gbps SR10 and 10 X 10 Gbps.

The original CFP specification was proposed at a time when 10 Gbit/s signals were far more achievable than 25 Gbit/s signals. As such to achieve 100 Gbit/s line rate, the most affordable solution was based on 10 lanes of 10 Gbit/s. However, as expected, improvements in technology has allowed higher performance and higher density. Hence the development of the CFP2 and CFP4 specifications. While electrical similar, they specify a form-factor of 1/2 and 1/4 respectively in size of the original specification. Note that CFP, CFP2 and CFP4 optical transceiver are not interchangeable (but would be inter-operable at the optical interface with appropriate connectors). The following table shows the basic parameter of CFP, CFP2 and CFP4 transceivers.

In this article, we mainly introduced the definition, core features, inner structure and development of CFP modules. Comparing to 100G QSFP28 transceiver, CFP price is not so competitive. But CFP optical transceiver is still the key to cost-effective and reliable 100G deployment, and it has been widely deployed in OTU4 411-9D1F, 100GBASE-LR4 Ethernet and data centers.

With the explosive growth in mobile data traffic, data centers, and cloud services, people’s call for 100G Ethernet is more higher than ever before. To build and support the 100G Ethernet, a variety of technologies and devices are needed. 100G CFP modules, QSFP28 modules and 100G CFP to QSFP28 adapter converter module are of necessity. This article would put emphasis on introducing four 100G CFP to QSFP28 adapter converter modules and their applications.

The 100G CFP to QSFP28 adapter converter module is a high performance, hot pluggable, and interconnect solution supporting 100G Ethernet and Telecom. The converter module converts a CFP MSA interface to 1-port of 100GE QSFP28. It is compliant with the CFP MSA. The converter module supports FEC (Forward Error Correction) function; the user can enable the FEC function through the register configuration.