With the ever growing usage of 10G network, 10G could not satisfy the requirement for some Ethernet network users who urge for a higher demand on speed, distance, media and cost. Under this circumstance, upgrading network is paramount. For 100G network upgrading, there are three available approaches, “10G—40G—100G”, “10G—25G—100G” or “10G—25G—50G—100G”. The latter two are announced to better satisfy the data center and cloud network. Comparing to 40G and 100G, people heard less about 25G and 50G. So what are they? This article would put emphasis on 25G Ethernet and 50G Ethernet as well as their optics. 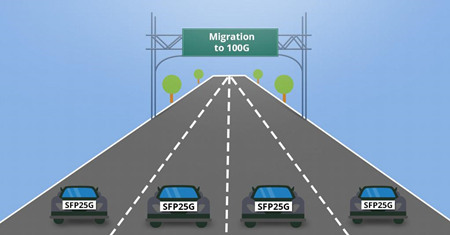 25 Gigabit Ethernet, abbreviating as 25G Ethernet, is standard for Ethernet network connectivity. Developed by IEEE P802.3by 25 Gb/s Ethernet Task Force, 25G Ethernet is a standard for Ethernet connectivity. The 25 Gigabit Ethernet Consortium is an open organization to all third parties who wish to participate as members to enable the transmission of Ethernet frames at 25 or 50 Gigabit per second (Gbps) and to promote the standardization and improvement of the interfaces for applicable products. The main features of 25G Ethernet are listed in the following:

SFP28 is the abbreviation of Small Form-Factor Pluggable 28, which is the third generation of SFP interconnect systems. The SFP28 optical module is designed for 25G performance and developed by the IEEE 802.3by specification. According to the SFP28 Multi-Source Agreement (MSA) and SFP28 specification, the SFP28 is designed with a form factor, optical/electrical connection and digital diagnostic interface. In addition, the SFP28 optical transceiver has also been designed to meet the harshest external operating conditions including temperature, humidity and EMI interference. Below are the industry standard 25G optics: 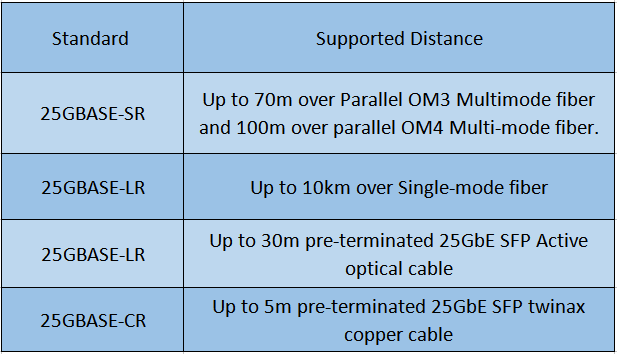 Comparing to 40G Ethernet, 50G Ethernet is more rarely known by people. Being led by the 25G Ethernet Consortium, 50G Ethernet is initially based on 2 lanes of 25 Gb/s. IEEE802.3bs is the 50G per lane specifications to support Nx50G configurations. And the standard expected in September 2018 while the interface expected on the market in 2018+. Different from 40G Ethernet, 50G initial limited deployment as proprietary 2x25G. In terms of technology, 40G and 50G per lane (Serial) technology will be defined together (40G as reduced speed 50G). With the respect of cost, 40G and 50G Serial will have similar cost, i.e. 50G Serial will offer 25% more bandwidth for the same cost. The core features of 50G Ethernet are listed in the below:

Through this article, we are cleared the 25G and 50G Ethernet as well as their optics respectively. With the ever increasing usage of network data due to millions of new connected devices to servers and storages data centers, 25G Ethernet and 50G Ethernet provide a flexibility, scalibilty, cost-efficient way for adapting to future network growth.