PoE Switch vs Non-PoE Switch: What Are They?

To understand the PoE switch, we’d better know Power over Ethernet first. PoE is a revolutionary technology that allows network cable to provide both data and power for the PoE-enabled devices. The PoE can provide higher power and reduce a lot of power cables during network. Usually, it is used for VoIP phones, network cameras, and some wireless access points.

PoE switch is a networking device with PoE passthrough which has multiple Ethernet ports to connect network segments. It not only transmits network data but also supplies power via a length of Ethernet network cable, like Cat5 or Cat6. The types of hubs can be classified into 8/12/24/48 port Gigabit PoE switch, or unmanaged and managed PoE network switch. Among the various port designs, the 8 port PoE switch is considered as a decent option for home network and 24 port PoE switch is popular for the business network.

Non-PoE switch, just as the name, is the normal switch, which can only send data to network devices. There is no PoE in the normal switch to supply electrical power for end users over Ethernet.

For non-PoE switch, it can be PoE ready only by installing a PoE injector to power a few devices. The injector is able to add electrical power and then transmits both data and power to power devices simultaneously. Users require one extra cable to connect power outlets. In this solution, if a PoE injector goes out, it only affects one device. But if the PoE goes out in a PoE switch, all PoE devices will be down. 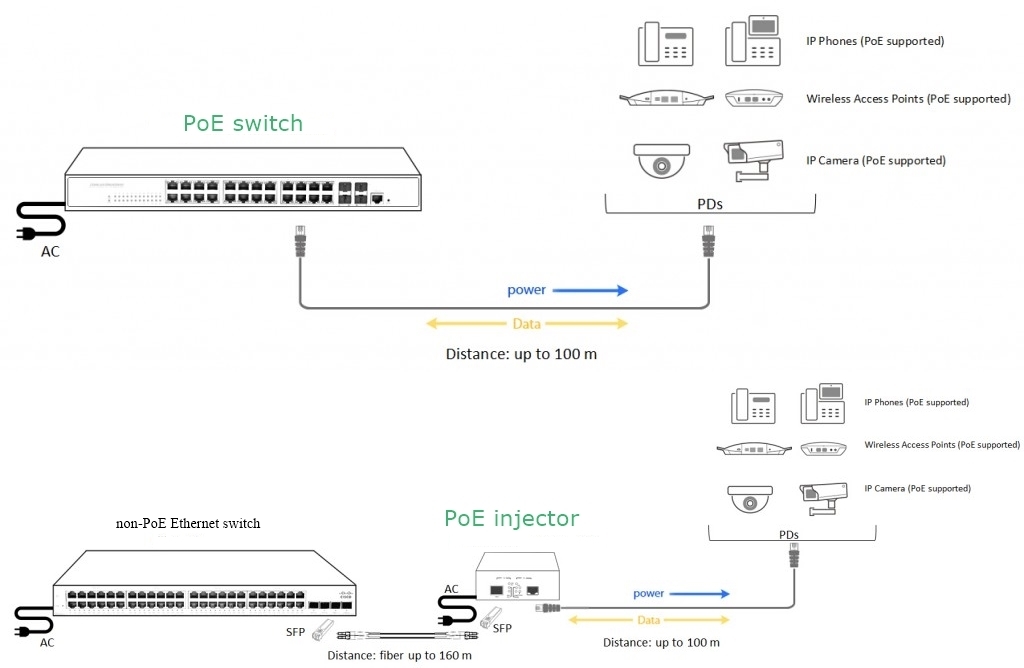 PoE Switch vs Non-PoE Switch: Which One to Choose?

Flexibility – The PoE switch is powered through existing PoE network infrastructure and eliminates the demand for additional electrical wiring. This gives you flexibility to employ the switch wherever you need.

Cost-efficient – There is no need for users to purchase and deploy additional electrical wires and outlets with PoE switch. Therefore, it makes great savings on installation and maintenance costs.

After the comparison of PoE switch vs non-PoE switch, do you know which one to choose? Actually, it depends on your real needs. FS is a good place to go for the reliable and cheap PoE or non-PoE network switch. Welcome to contact us if you have any needs about it.

Related Article: 24 Port Managed PoE Switch: How Can We Benefit From It?