As a worldwide leader in IT and fiber optical networking, Cisco switches play a leading role in manufacturing network switches and in providing switching solutions for data center and enterprise networks with large and medium-size forms. MikroTik, a Latvian company which was founded in 1996 to develop routers and wireless ISP systems. Their cloud switches are highly favored by many Ethernet users in recent years. And thus, people are entangled with Cisco and Mikrotik switches. This article would give brief introduction to Cisco and Mikrotik switches, and put emphasis on Mikrotik Switches Vs Cisco Switches.

The CPU on both Cisco and Mikrotik switches is used for management purposes (snmp stats, cli management, etc) and it does not affect the data path. Switching is not done in CPU, neither on Cisco nor on Mikrotik. Switching is done on dedicated ASIC chips specifically designed for this job (thus giving wirespeed). So comparing the CPUs won’t mean much about forwarding performance – which is the metric you should care about.

One of big problems with Mikrotik switches is their power. The buyers would prefer to pay another couple hundred dollars to have dual power supplies that are removable. And thus, many Ethernet users cannot use Mikrotik in these cases. Comparing to Mikrotik switches, Cisco switches have less power consumption by their advanced technology.

When configuring your existing network monitor system(s), your network monitor system(s) may not even know what a Mikrotik is and probably does not have native built-in MIBs/OIDs used by SNMP to auto-check/monitor a network. Thus, an administrator would probably need to configure the Mikrotik graphic icons and configure all of the SNMP checks for MIBs/OIDs from/to a Mikrotik.

Mikrotik Switches Vs Cisco Switches: How to Select?

Mikrotik routers and switches are great. Most people like them and use them almost everywhere. However, because Mikrotik is still the new kid on the block when it comes to carrier-grade commercial-grade business grade high-throughput products, it may sometimes be a little difficult to find local network technicians or local phone support for Mikrotik products when adding new equipment into your network. So Cisco switch is more solid and people are more satisfied with them.

Maximizing scalability and optimizing performance are two paramount factors when you design or upgrade your network. It is hard to find the right balance. Given that you need more than 48 ports in a wiring closet, but you could not decide which type of switches to buy. Stacking switch or non-stacking switch? Or does a modular chassis switch solution make more sense? In this article, we would make a comparison between stacking and chassis access switches and guide you to make an appropriate decision.

Over the years, stacking network switches have been highly favored by lots of Ethernet users and been a core component of an enterprise-grade switch. So what is reason for the popularity of stacking switches? By using stacking switches, we can add ports as we need them by simply purchasing another switch and adding it to the stack. We can stack up to nine Cisco 3750-X switches and have 432 x 10/100/1000 ports and 18 x 10 Gbps ports. We can do this using only 9RU’s of rack space. A chassis would require over double the rack space to achieve this access port density. This makes these switches very popular as top-of-rack switches in the data center. 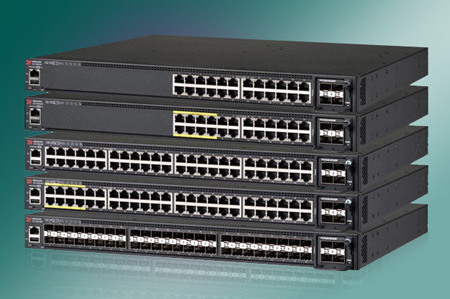 Chassis devices, often being “premier” devices, may offer software and/or hardware features unavailable on a stack. They are the flagship models of every vendor’s switching line. In contrast to the fixed configuration switches, it is engineered to operate as single integrated system. Configuring high availability is simple and it works every single time. A failed line card will not bring down the entire chassis. Additionally, a chassis will drive consistency in deployment. 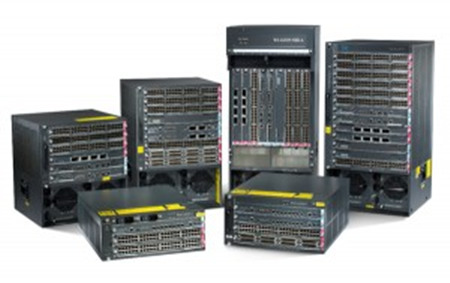 Just as the same as the every comparison on the similar kits, the decision really depends on your actual requirements. Once we have this, finding the right hardware is very straightforward. It is important to balance the cost of acquisition versus the cost of operations and impact to the business due to outages. And that is what we always thinking about when we make a decision.

In this article, we mainly provide the detailed information about stacking and chassis switches solutions, and offer you relatively enough information to help you to make a decision on choosing the best switching solutions for setting up or upgrading your network. There are too many variables to give a one-size-fits-all recommendation, but in general chassis Ethernet switches’ solutions are our preference. In addition, you should keep in mind that pricing should not be the focused too much. We can get both designs for a pretty reasonable price, regardless of requirements. If your network can benefit from both stackables and chassis, the chassis solution would be a good choice.

Related Article: Stacked switches vs Chassis switch at the core

Now some LAN is still structured with twisted pair wiring. As a result, the transmission distance is greatly limited with only 100 meters. To extend the data transmission distance, fiber cable gains the popularity since it can support longer transmission distance and it’s more and more inexpensive. But in practice, copper is familiar and easier to be installed. Besides, many network devices still have copper ports. It would cost too much to replace all the expensive equipment with fiber optics. So media converter is applied to realize the copper & fiber conversion with the cheapest price. Media converters make it possible to migrate a local network to fiber while maintaining the existing infrastructure.

When connecting legacy 10BASE-T network segments to a newer 100BASE-FX Fast Ethernet infrastructure, media converter is the best solution. With one RJ45 port and one SFP socket, this 10/100Base-T to 100base-X SFP Ethernet fiber media converter can mediate between 10/100M UTP ports and 100M optical fiber ports. And it can reduce electromagnetic interference and extend the distance up to 100 km. Media converters can support network speeds from 10 Mbps to 10 Gbps.

Existing data rate in the LAN backbone at 100Mbps or Gigabit speeds, fiber can accommodate high-bandwidth applications such as streaming media and voice over IP for more secure desktop connections. Media converters can make FTTD (fiber to the desktop) cost-effective in the LAN. With media converters, the cost of expensive fiber home which requires all-fiber switches, patch panels and network interface cards can be saved by converting in the telecommunications room and at the desktop.

Ethernet is the dominate LAN protocol with the highest market penetration. Past 10/100Mbps connections in LAN can’t meet the demands for high-speed data traffic. With the publication of the 10, 40 and 100 Gigabit Ethernet standard, the applications space for Ethernet expands from the LAN to MAN.

Media converters are deployed in the MAN to provide the physical layer connection and to bridge the bandwidth gap that exists between LAN and MAN. In the LAN, the structured cabling is often twisted-pair copper cable or multi-mode fiber. While the cabling is often single-mode fiber in the MAN. So media converters are used at both ends of the first mile to provide the electrical-to-optical conversion from the POP (point of presence) switching router to single-mode fiber, and back to 10/100/1000BASE-T Ethernet at the customer premises. At the same time, if the customer needs to increase the internet speed, the bit rate can be increased through the POP switch and the converter will automatically adapt to the increased speed, avoiding a visit to the customer site or POP.

Media converters can also enhance the consistency of service. On one side, if there is any problem, the network administrator can troubleshoot one circuit and keep other customers’ connections running. On the contrary, if a fixed port switch goes down, all connections will be down simultaneously when repairing a faulty port. On the other side, customers can used the media converter as an optical demarcation point, which brings cost savings and simplicity.

There are many benefits of using media converter in LAN and MAN, such as copper and fiber conversion, speed conversion, cost reduction, simple network troubleshooting and so on. Media converter is not only the optical demarcation between LAN and MAN, but also the bridge between LAN and optical backbone of service provider. With such a cost-effective solution, what’s the reason not to use?