Optical fiber is reliable and cost-effective, therefore FTTx (fiber to the x) is widely used as a new generation of broadband solutions. How to implement FTTx? PON, passive optical network, is generally considered to be the best approach. The text will provide a basic introduction to PON.

A passive optical network is a single, shared optical fiber that uses unpowered optical splitters to enable a single optical fiber to serve multiple end-points. PON is a point to multipoint (P2M) network. Each customer is connected into the optical network via a passive optical splitter, therefore, no active electronics in the distribution network and bandwidth is shared from the feeder to the drop. Purely optical passive components in a PON architecture can withstand severe and demanding outside plant environment conditions without the need to consume energy between the central office exchange and the customer premises. The low maintenance requirements of these passive optical components will significantly reduce the cost of upgrades and operating expenditures. The picture below shows a PON architecture. 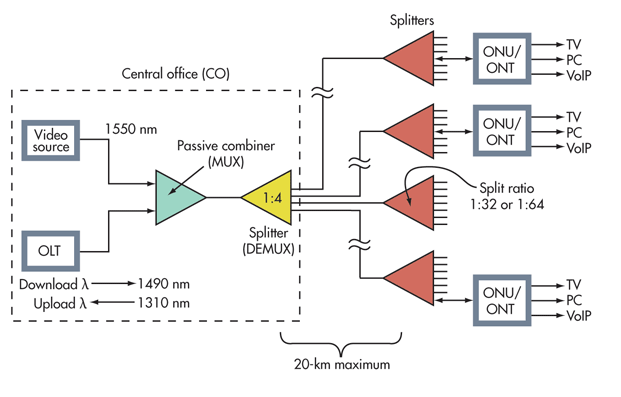 ATM (asynchronous transfer mode) passive optical network (APON) was initiated in 1995 by ITU/FSAN and standardized as ITU-T G.983. APON was the first PON based technology developed for FTTH deployment. APON is renamed as broadband passive optical network (BPON). BPON is stable standard that re-uses ATM infrastructure. APON/BPON systems typically have downstream capacity of 155 Mbps or 622 Mbps. Upstream transmission is in the form of cell bursts at 155 Mbps.

While BPON may still be used in some systems, most current networks use Gigabit passive optical network (GPON) initiated by FSAN in the year 2001 for designing networks over 1Gbps. GPON architecture offers converged data and voice services at up to 2.5 Gbps, and enables transport of multiple services in their native format, specifically TDM and data. GPON uses generic framing procedure (GFP) protocol to provide support for both voice and data oriented services. A big advantage of GPON over other schemes is that interfaces to all the main services are provided and in GFP enabled networks packets belonging to different protocols can be transmitted in their native formats.

Ethernet passive optical network (EPON) is one of the solutions considered by new IEEE 802.3ah in September 2004, focusing on direct support of Ethernet services. EPON uses CWDM and TDM to provide bi-directional and point-to-point communications over a fiber and maintains frame structure for both upstream and downstream. EPON standards networking community renamed the term ‘last mile’ to ‘first mile’ to symbolize its importance and significance as part of the access network. The system architecture is the same as GPON but data protocols are different. 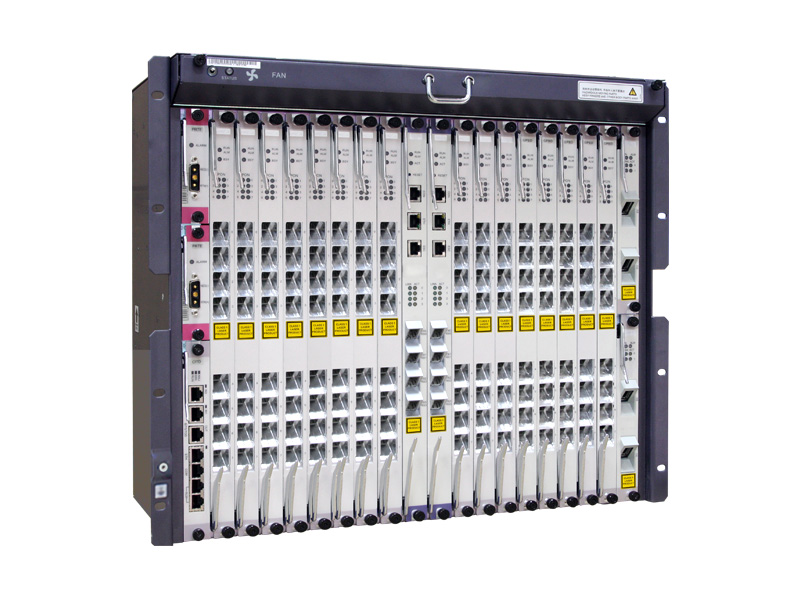 OLT: The optical line terminal is the main element of the network and it is usually placed in the Local Exchange and it’s the engine that drives FTTH system. OLT has two float directions: one is upstream getting distributing different type of data and voice traffic from users, the other is downstream getting data, voice and video traffic from metro network or from a long-haul networkand sending it to all ONT modules on the optical distribution network (ODN). The picture on the left shows an OLT. 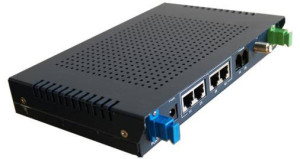 ONU/ONT: Optical network terminals or units are deployed at customer’s premises. ONTs are connected to the OLT by means of optical fiber and no active elements are present in the link. A single ONT can serve as point of access for one or multiple customers and be deployed either at customer’s premises or on the street in a cabinet. The ONU usually communicates with an ONT, which may be a separate box that connects the PON to TV sets, telephones, computers, or a wireless router. The ONU or ONT can be the same device. The picture on the right shows an ONT.

PONs offer low cost connectivity for a large number of users with high security and relatively low management needs. Telecommunications companies use PONs to provide triple-play services including TV, VoIP phone, and Internet service to subscribers. A PON could also serve as a trunk between a larger system, such as a CATV system, and a neighborhood, building, or home Ethernet network on coaxial cable. As PONs grows into millions of homes, it can be seen that a new era of access networks is upon us. Fiberstore offers a series of high reliability and affordable fiber optical access devices for PONs, including OLT, ONU/ONT, PON splitters and transceivers, to meet customers’ fast growing demand of PON deployment.